I'll bet the graveyards of heaven are really beautiful.

It's Amy Coney Barrett.  Considering that the left is going to lose influence in the Supreme Court for at least a generation, we can expect anti-Catholicism to once again become intellectually respectable.  And since these are Democrats, the same party that has no civilization, decency or honor left, we can expect the left to pretend to be "concerned" about Ms. Barrett's two Haitian adoptee children.

After all, if you're entirely willing to enthusiastically lie through your teeth in order to publicly destroy a man, using someone's children against them should be the easiest thing in the world for you.  As far as I'm concerned, the Democratic Party now has the same reputation as its former militia, the Ku Klux Klan.  And I'm not sure which direction the Democrats are headed.

Lately, it has become the fashion for much of our protesting class to block traffic in the public streets while harassing and/or threatening individual drivers.  Stupidity like this hits WAY too close to home for Jim Treacher.
Over the last few weeks, I’ve seen several instances of “peaceful protesters” (AKA rioters) testing the laws of physics by using their fragile human bodies to challenge moving motor vehicles. The vehicles always win, because that’s how reality works.
I don’t know why some people think it’s a good idea to do this. Okay, so you hate the police. That’s your right. This is America, and you can hate anybody you want. But your hatred and anger isn’t some kind of mystical force field. Your belief that you’re right isn’t going to stop a moving car. The matchup isn’t David vs. Goliath, it’s Bug vs. Windshield.
This is personal to me because I know what it’s like to get hit by a car. It happened to me 10 years ago. I was crossing a street, with the Walk signal and inside the crosswalk, when a driver made an illegal left turn into the intersection and hit me. (This was in Washington, D.C., and the vehicle was a State Department security SUV, which is a whole other story.) It shattered my knee and I needed two surgeries and 18 months of physical therapy before I could walk unaided again. I still deal with the injury every day. Every time I take a step with my left leg, I’m reminded of it. I know what happens when a moving vehicle meets a human body, and I wouldn’t wish it on my worst enemy. I wouldn’t even wish it on Brian Stelter.
Posted by Christopher Johnson at 9:59 PM 4 comments:

Everyone who saw the disgraceful performance of the Democrats at the Kavanaugh hearings to Delaware Senator Chris Coons.  Bite me.
Posted by Christopher Johnson at 8:38 PM 1 comment:

KNOW WHAT WOULD BE NICE?

If journalistic organizations like Reuters would employ some actual Christian since that would hopefully mean that I wouldn't have to see nearly as many useless, worthless, ignorant, and bigoted pieces like this one as I do now.
Posted by Christopher Johnson at 8:00 PM 3 comments:

Is it sinking in yet? Nobody is ever going to give you a state. Particularly you.

There are many explanations for this dramatic change in the Middle East balance of power and the evolving alliance between most of the Arab-Sunni states and Israel. One could cite the end of the Cold War, the collapse of Pan Arabism, the rise of Sunni and Shiite Islamism, the growing “cold war” between Saudi Arabia and Iran, and America’s energy independence. That person might also note the impact of the strategic depreciation of the “oil weapon,” the loss of centrality of the Palestinian issue in regional and global politics. and the rising fear—shared by Arabs and Israelis—of a strategic threat posed by Iran.

UPDATE: Looks like the left will be playing this religious bigot garbage again. 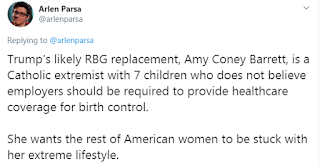 "ALL THE PEOPLE" JOE?